Here in the United Kingdom, we have many national myths.  We call the Houses of Parliament ‘the Mother of Parliaments’. We believe that our democracy is a model for the world. Our way of doing politics is perfect and therefore sacrosanct.

This is a hangover from the days of the Empire when we exported ‘democracy’. A time when we imported half the world’s riches, often without the consent of the original owners. Our so-called ‘representative democracy’ still runs to 18th-century lines rather than those of the 21st. It is no longer fit for purpose.

We also pride ourselves on our system of universal suffrage. Everyone over the age of 18 is entitled to vote, but the move came late. Universal franchise only began in the 1830s, and the right to vote was conceded reluctantly. It happened in a piecemeal fashion in response to movements like the Chartists.  Women only won the full right to vote in 1928 despite the efforts of the suffragettes and suffragists before WW1.

And thanks to our winner-take-all voting system – we haven’t had a majority government since 1959 – half of us are regularly disenfranchised at every General Election. The only European country to share our voting system is Belarus, ruled by dictator Alexander Lukashenko. All others use a form of proportional representation so that every vote counts.

Our voting system doesn’t deliver a meritocracy either. We are not ruled by the brightest and the best. We live in the age of career politicians whose first loyalty is to their party. Over the years, the parties have become institutionalised and all-powerful. The whipping system in Parliament ensures MPs toe the party line, and party loyalty rather than talent is the route to advancement.  The ‘constituency link’ to which many pay lip service is often broken in favour of party loyalty.

And we’re not even citizens. We are still subjects of the Crown in so many ways, and we have no guaranteed, transparent rights. In other democracies ‘the people’ are sovereign.

In the UK, the Crown’s prerogative powers are vested in Parliament – the House of Lords and the House of Commons working together. But over the years, more and more powers have been taken from the Lords by the Commons. Then the power of the Commons was reduced by the governing party. Lord Hailsham, a former Conservative Chancellor, called our system of government ‘an elective dictatorship’. This term describes the unfettered power of the Prime Minister if their party has a large Commons majority.

Some of this may surprise you. That is because we are uneducated about how our country works. Why? Because it suits our political class for us to be passive and submissive.  Traditionally, the UK government had little interest in citizenship education of the populace at large, fearing that it could undermine patriotic loyalty and stimulate radicalism. Understanding our democracy only became mandatory in English schools in 2002. Citizenship education in the devolved UK education systems of England, Northern Ireland, Scotland, and Wales has developed in diverse ways.

It is significant that young people are eventually learning about their country’s governance. Still, it leaves most of the voting population with no formal political training. So it’s not surprising that they don’t understand their role as citizens and how to participate in democracy.  You can hardly be surprised that participation in elections is poor and getting poorer.

Take a look at the chart below. 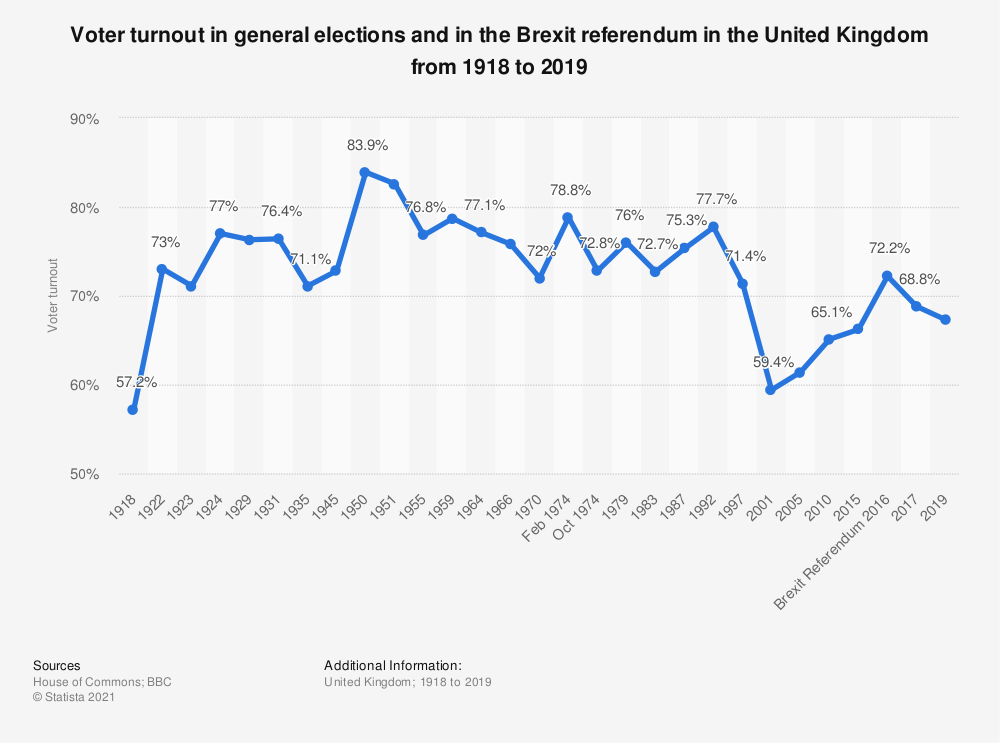 Voter participation reached a peak in 1950 and then declined until it reached a nadir of 59.4% in 2001.  It recovered somewhat in subsequent General Elections – and 72.2% turned out to vote in the Brexit referendum in 2016. Since then participation has declined again. Engagement in 2019 was 1.5% lower than in 2017. Voting in local and by-elections has been historically low, with the notable exception of Chesham & Amersham, where a number of community organisations got behind the Liberal Democrat candidate to overturn a 16,000 Conservative majority. It demonstrated what could be achieved when people work together locally for a common cause.

Democracy Hubs are so important because it’s time to reclaim our democracy. They’re needed because democracy is about people, not parties – and certainly not ‘elective dictatorships’. They aim to improve political education, discourse and participation.